Steep elevation of creatinine in a patient with acute flank pain

Diagnosis
Renal ultrasonography documented a hypertrophic left kidney (major diameter of 16,8 cm), with mild dilatation of the renal pelvis; the right kidney could not be visualized and the urinary bladder was almost empty of urine.

Treatment had commenced with hydration by intravenously administered fluids at a rate of 3 l/day, analgesics in the form of diclofenac which was discontinued to prevent any further renal damage and was substituted by pethidine, and antimicrobial therapy with ciprofloxacin plus amoxicillin/clavulanate for the possibility of concomitant complicated infection. However, the patient remained anuric and the pain was not alleviated. Thirty-one hours after admission sCr and BUN rose to 7,0 and 63 mg/dl, respectively.

The diagnosis of urinary tract obstruction was confirmed by an abdominal CT scan, which revealed a 6 mm calculus located in the left ureterovesical junction along with minimal dilatation of the left pelvicalyceal system, and a small, atrophic, right kidney (Figure 1). To relieve the obstruction ureteroscopy was performed, during which the stone was removed and a ureteral stent was placed to allow for drainage of residual stone fragments.

Teaching points
- In the case we report, excessive fluctuations in sCr and BUN values were noted in a male, middle-aged patient with acute anuric renal failure, caused by unilateral urinary tract obstruction of a solitary functioning kidney. The measured rate of rise of the patient's sCr was 4,6 mg/dl in a 31 hours interval, which corresponds to a rise of 3,6 mg/dl per day. Although our measurements were not repeated, so as to control for possible technical inaccuracies, the fact that BUN values exhibited analogous variations to those of sCr, strengthens the validity of our measurements (Figure 2).

- The case of acute renal failure caused by urinary tract obstruction that we report, shows that a greater than typically expected rate of elevation of sCr concentration may be observed, possibly due to an interplay of the various known factors or even of other not still documented ones, that can influence sCr values.

Acknowledgments
The case was prepared by Drs. G. Peppas, KG. Kiriakidou, and DE. Karageorgopoulos; it was submitted for consideration for publication.

Figure 1. Abdominal CT showing (A) a hypertrophic left kidney (arrowhead) with mild dilatation of the pelvicalyceal system, and an atrophic right kidney (white arrow), and (B) a radio-opaque 6 mm calculus located 10 mm proximally to the left ureterovesica 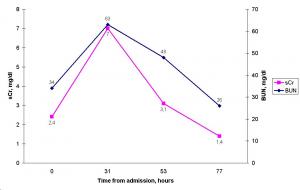 Figure 2. Fluctuations over time of serum creatinine (sCr) and blood urea nitrogen (BUN) values in a patient with acute urinary tract obstruction of a solitary functioning kidney, that was relieved by endoscopic removal of the calculus
back to top