A 71-year-old woman was admitted to the hospital due to acute myocardial infarction. Prior medical history included arterial hypertension, insulin-dependent diabetes mellitus, and hyperthyroidism. The patient had no history of tobacco or alcohol use. On admission, she was afebrile. Oxygen saturation was 97 % on room air. Chest x-ray (CXR) was normal. Blood glucose was 288 mg/dl.

She stayed in the Coronary Care Unit (CCU) for 48 h and was treated with aspirin (100 mg per day), clopidrogel (75 mg per day), heparin (1.000 iu/h), and a monoclonal antibody against platelet receptor Gp IIb/IIIa. Percutaneous transluminal coronary angioplasty (PTCA) was performed. Two days following CCU discharge, the patient became febrile (38.5 oC) with non-productive cough and progressive dyspnoea. Three days later, she was readmitted to the medical Intensive Care Unit (ICU) due to severe dyspnea and type I respiratory failure. On admission, she was tachycardic (113 beats / min) and tachypneic (30 breaths/min). The temperature was 38.6 oC and ABG analysis disclosed a PaO2 of 58.0 mm Hg, a PaCO2 of 25.8 mm Hg, pH=7.39, and a HCO3 of 15.6 mmol/L. Chest auscultation revealed end-inspiratory crackles, bilaterally diminished breath sounds, and a grade I apical systolic heart murmur. The patient was intubated and admission-CXR revealed diffuse infiltrates in both lungs and pleural effusions. A white blood cell count of 17.600/ìL (89% polymorphonuclear leukocytes) was noted, as well as a hematocrit of 32 %, a platelet count of 344,000/ìL, and an erythrocyte sedimentation rate of 110 mm. Liver enzymes, and serum urea and creatinine were within normal limits.

The patient was treated with intravenous piperacillin-tazobactam, ofloxacin and teicoplanin. She remained febrile (39 oC) with no improvement in respiratory function and chest X-ray. Blood, urine and bronchial cultures were negative for common bacterial and fungal pathogens. A chest computerized tomographic (CT)-scan demonstrated confluent opacities in the right upper and middle lobes and in the left lower lobe as well as air-bronchograms, an extensive right pleural effusion and a pathological swelling of pretracheal lymph nodes (Figure 1).

What are possible causes of the pulmonary infiltrates? 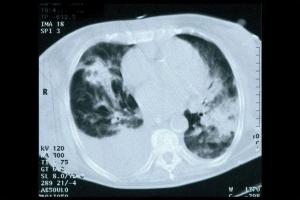