A 57-year-old man was admitted to the intensive care unit (ICU) after initial resuscitation and hemodynamical stabilization in the emergency ward (EW), where he presented in a comatose state with shock (blood pressure 60/40 mmHg, heart rate 140 pulses/min, body temperature 36.5oC, respiratory rate 28 breaths/min, O2 saturation 90% on room air). Family members reported that the patient had developed a rash (not further specified) and fever seven days prior to his admission to the hospital.

The rash gradually extended on large areas of both lower extremities. The patient had a 30-year history of multiple sclerosis and a 2-year history of Waldenström's macroglobulinemia for which he was receiving corticosteroids. He also had a history of fracture of the right hip. He was confined to bed for the last 10 years prior to his admission. The rest of the physical examination on admission showed icteric conjunctivae and decreased respiratory sounds as well as fine crackles in the pulmonary bases. There were extensive, hemorrhagic, necrotic areas of the skin of the lower extremities and the abdomen as well as ulcers and bullae (Figures 1 and 2). 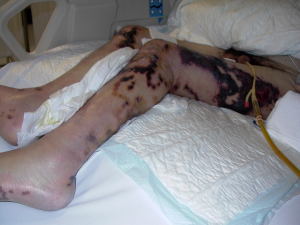 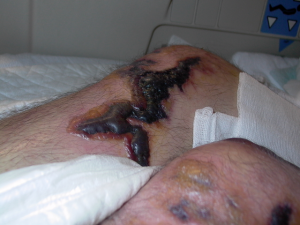