Limitations in the management of aortic graft infection - 1/3/2005

A 56-year-old female from Greece with a history of Takayasu's disease (diagnosed in 1992) was admitted in late November 2002 to our unit because of fever, which started in April 2002. She was diagnosed at another hospital to have aortofemoral graft infection in June 2002. Only one of several blood cultures, performed at the previous hospital, grew a strain of Staphylococcus epidermidis. She received prolonged courses of antibiotics including vancomycin, linezolid, and rifampin. In addition, â-lactam antibiotics with coverage against Gram negative organisms had been given, because of the possibility that the isolated microorganism (Staphylococcus epidermidis) was a contaminant. Her fever relapsed and she was admitted to our unit for management.

Physical examination on admission showed temperature 37.5 degrees Celsius. There were scars from previous operations. A bruit was audible over the left carotid and her femoral arteries. Right radial artery was not palpable. Laboratory testing on admission showed erythrocyte sedimentation rate (ESR) 60 mm/ 1st hour (normal<10) and C-reactive protein (CRP) 3mg/dl (normal<0.5). An electrocardiogram showed T wave inversion in leads V1 and V2. A magnetic resonance imaging (MRI) of the area of the aortofemoral graft was suggestive of active inflammation of the graft and of the surrounding area as well as adhesions of the third (retroperitoneal) part of the duodenum with the abdominal aorta.

What is the appropriate management? 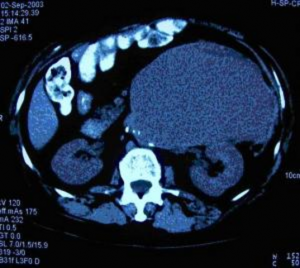