Representative case report
A 55-year-old man presented to us with pyorrhea from the sternotomy site of 11 months duration. His past medical history was significant for a coronary artery bypass grafting (CABG) operation that was performed 2 years earlier [using the left internal mammary artery (IMA) and a saphenous vein graft]. A superficial sternal wound infection developed a few days postoperatively. The patient received anti-bacterial treatment (amoxicillin-clavulanic acid per os) for 3 months and wound care that did not lead to any clinical improvement. Subsequently, he underwent a second operation with extended sternal wound debridemend, which included partial sternectomy. Seven months after the second operation he developed signs of inflammation in the sternotomy site as well as purulent discharge. He received several combinations of antimicrobial agents including rifampin and ciprofloxacin per os for 4 months, which did not lead to control of the infection. The patient was admitted to our hospital for the management of recurrent mediastinitis.

His past medical history was also significant for a spinal column operation due to protrusion of a lumbar intervertebral disk 3 years earlier. In addition, ulcerative colitis was diagnosed 15 years earlier for which the patient had not received any medications for five years prior to his admission to our hospital.

Physical examination on admission showed a fistula of the median sternotomy site with purulent discharge (Figure 1) and local signs of inflammation (redness, tenderness, swelling and increased temperature). Palpation of the upper chest revealed swelling in the area of the suprasternal notch (Figure 2). The patient was afebrile and had normal blood pressure, pulse rate, and respiratory rate.

Routine laboratory tests including a complete blood count, hematocrit, hemoglobulin, blood urea, serum creatinine, blood glucose, liver function tests, and urinalysis did not show abnormal findings except for an increased platelet count (617,000/mm3). C-reactive protein (CRP) and erythrocyte sedimentation rate (ESR) were elevated (CRP = 1.43 mg/dl with normal values < 0.50 mg/dl, and ESR = 34 mm/first hour with normal values 0-20 mm). A computed tomography scan of the thorax showed a big cavity in the mediastinum that was in direct contact with the aorta and the trachea (Figure 3). Pseudomonas aeruginosa, Enterococcus faecalis and Staphylococcus aureus were isolated from cultures of 3 different samples of the discharge.

What is the best therapeutic approach? 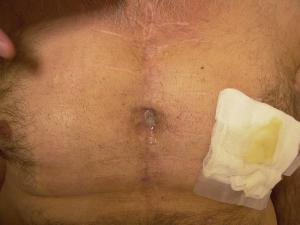 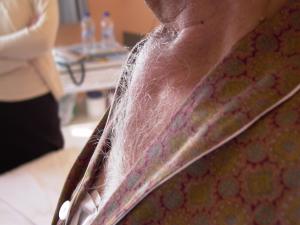