Fever in a patient with liver metastasis of bowel carcinoma 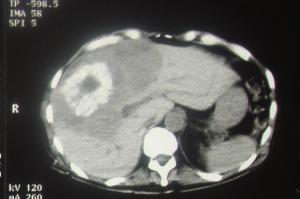 Management
The patient was commenced on treatment for the responding pathogens with intravenous piperacillin-tazobactam, and caspofungin acetate and oral administration of isoniazid, rifampicin, ethambutol, and pyrazinamide and he became afebrile with a concurrent improvement in laboratory indices during the next 6 weeks. The selection of four drugs as the initial regimen against the mycobacterial infection was based on data regarding the considerable proportion of multidrug resistant M. tuberculosis in Greece as well as personal experience.1,2 Treatment with antituberculous drugs continued. However unfortunately the patient died 5 months later due to his neoplastic disease.

Teaching points
1. Liver abscesses are either monomicrobial 3 or polymicrobial 4. Polymicrobial liver abscesses are usually due to a combination of various gram-negative bacteria and anaerobic bacteria. Various underlying conditions have been associated with their presence such as diseases of the biliary tree, diseases of the colon, immunosuppressive conditions bacteremia and transarterial chemoembolization.5

2. Various primary and secondary tumours of the liver have been associated with hepatic abscesses.6,7 An underlying malignancy of the colon may be present and should specifically sought for if bacteria such as Streptococcus bovis, Clostridium septicum are cultured from aspirated pus or the blood.8,9 The differentiation of a liver abscess from a mass due to primary or secondary liver cancer is not always easy. In fact many times the two entities coexist i.e. a superinfection of a metastatic liver mass happens as the latter may undergo necrosis at its centre.10,11

3. To our knowledge there is only a previous case where M. tuberculosis formed part of the list of pathogens responsible for the polymicrobial liver abscess.12 Polymerase chain reaction testing of liver tissue for DNA of M. tuberculosis is useful in reaching a diagnosis in cases where other diagnostic modalities remain negative, as was the case in our patient.13 Our patient's case is unique in that the hepatic metastasis was infected with three different kinds of pathogens namely a bacterium, a fungus, and a mycobacterium. While presentation of patients with liver abscess may be attributed immediately to the usual culprits (gram negative and gram positive bacteria and anaerobes) 14 one may possibly have to consider the concurrent presence of other microorganisms such as fungi and mycobacteria, especially in the setting of a patient with malignancy.

Acknowledgements
1. The case report was submitted for publication.
2. Drs. P. Rafailidis and A. Kapaskelis participated in the care of the patient.