Severe shortness of breath after PTCA 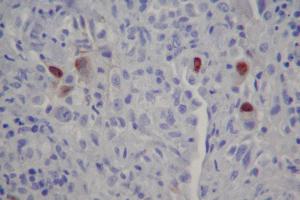 Teaching points
1. Ventilator associated pneumonia (VAP) due to CMV is a largely unexpected but probably underestimated diagnosis1. In one study 25 of 86 patients with VAP and prolonged ICU length of stay had CMV pneumonia [1]. The presence of CMV IgG antibodies may help to identify a group susceptible to reactivation disease [1]. Recent reports have demonstrated that anti-CMV IgG seropositive ICU patients with severe illness (SAPS II score ³ 41 points) frequently develop active CMV infection [2]. In 10% of the cases examined, active infection progressed to severe and fatal disease [2]. Despite the fact that it is common to see CMV associated interstitial lung disease in post-transplant patients [3], there are only two cases in the literature where CMV related usual interstitial pneumonia has been reported in patients with no transplant history [4, 5]. One referred to a patient compromised by virtue of corticosteroid treatment [4] and the other patient was suffering from a concomitant thymoma [5].

2. In the present case, we speculate that reactivation CMV infection led to the development of usual interstitial pneumonia in a diabetic patient. Infections due to latent viruses, like CMV could theoretically induce immune reactions which activate T-helper cells and type II alveolar cells, thus resulting in local overproduction of growth factors (PDGF and TGF), fibroblast regeneration, and fibrosis. Notably, in the present case, there was no history of chronic interstitial pulmonary disease or fibrosis. One previous report has shown that many patients with pulmonary fibrosis exhibited CMV specific IgG seropositivity and positive complement binding for CMV [6].

3. Previous studies have suggested that CMV is an atherogenic factor predisposing to coronary artery disease. CMV contributed to one third of restenosis cases following angioplasty in recent reports [7, 8]. This was attributed to local CMV reactivation in the injured endothelium resulting in smooth muscle cell hyperplasia, inhibition of apoptosis and induction of atherogenesis [7, 8]. It has been hypothesized that CMV may be reactivated locally as a response to vascular injury in a subgroup of patients undergoing PTCA and in some cases may lead to severe infection [9]. The association between the previous PTCA and the subsequent development of fatal CMV associated usual interstitial pneumonia is of extreme interest in the present case. It could be hypothesized that after the myocardial infarction, the elevated catecholamine titers may have led to CMV reactivation and transient CMV antigenemia, which eventually contributed to the lung injury. That catecholamine infusion or treatment with phosphodiesterase inhibitors, both of which increase c-AMP levels, could contribute to CMV reactivation has been shown in a recent report [10]. In a similar manner, one could see CMV reactivation related disease in ICU patients via blood products transfusion containing leucocytes or the requirement of norepinephrine and other catecholamines infusion [2].

4. An interesting aspect of this case is the diagnostic procedure for the CMV identification. The detection of specific inclusion bodies in alveolar epithelial cells is the most reliable diagnostic criterion for CMV pneumonia. These bodies are rarely found in BAL-fluid, because the virus preferentially attacks alveolar and capillary-endothelial cells. For this reason, open lung biopsy is preferable to BAL and transbronchial biopsy. Although one could potentially diagnose idiopathic pulmonary fibrosis or diffuse interstitial lung disease based on clinical and radiographic criteria, in most cases it is necessary to perform surgical lung biopsy for the diagnosis and determination of the underlying histopathology [11]. However, it is difficult to decide on the performance of a surgical open lung biopsy given the potential complications for an intubated critically ill patient in the ICU setting, unless it is absolutely necessary. Analysis of BAL specimen using the CMV specific polymerase chain reaction measurement of viral load may contribute to diagnosis if open lung biopsy is not feasible [12].

5. CMV pneumonia must be included in the differential diagnosis in the appropriate clinical setting. Even in patients presenting with community-acquired pneumonia (CAP) Marrie et al reported that 4 out of 443 patients (0.9%) had documented CMV pneumonia as the underlying diagnosis [13]. Another fourteen out of 443 patients (3%) had fourfold increase in CMV IgM titers. From these patients, only six (33%) were immunocompromised, seven needed mechanical ventilation and five (28%) died [13]. In hospitalized patients, CMV is usually transmitted by means of blood products and via transplanted organs [14, 15]. In the presented case, we did not find evidence of recently acquired acute CMV infection. In addition there was no history of recent transfusions or overt immunosuppression besides the diagnosis of diabetes mellitus. We did not find reports of increased incidence of CMV infection in diabetic patients although an increased susceptibility to infection is seen with diabetes.

6. The isolation of Enterobacter cloacae in the bronchial secretions of our patient during ICU stay may represent coinfection or superinfection, which commonly occur during CMV infection. This could be due to several immunomodulating properties of CMV per se [2, 16].

7. In conclusion, an interesting case of CMV associated usual interstitial pneumonia in a diabetic patient is presented. The potential correlation of the previous PTCA with the reactivation of CMV, which led to a severe fatal CMV infection with the development of pulmonary fibrosis, is discussed. Correct diagnosis of CMV-associated severe bilateral pneumonia, even in a non-overtly immunocompromised patient depends on clinical awareness in the appropriate setting along with definitive proof of viral infection.

Acknowledgements
1. This case report was prepared for the web site by Drs. Michael Rizos, Sotirios Tsiodras, Aphrodite Betsou, Periklis Foukas, and Argyris Michalopoulos.
2. The case report was published in the European Journal of Clinical Microbiology and Infectious Diseases.