A female patient from Greece, born in 1955, visited our office in January 1998 for evaluation of recurrent right pleural effusion (Figure). The patient was treated for Hodgkin's disease (supra-clavicular and mediastinal lymph node enlargement) with radiation and chemotherapy in February 1974. The treatment consisted of a series of MOPP (nitrogen mustard, vincristine, procarbazine and, prednisone) and Co60 radiation over the mediastinum and lymph nodes above the diaphragm. Details about the radiation, including dosage, were not available. She also had a splenectomy at that time. The treatment of Hodgkin's disease was successful and led to disappearance of the enlarged lymph nodes. The patient felt well and was able to receive a degree from a graduate school and subsequently to work full-time without any problem.

The patient initially felt progressively short of breath during November 1997. She did not have any fever. A chest x-ray at that time showed bilateral pleural effusion and enlargement of the shadow of the heart. An echocardiogram revealed a significant amount of pericardial fluid. The patient was subsequently admitted to a hospital for treatment.

During a six-week inpatient stay she had an extensive work up for the etiology of the bilateral pleural effusion and pericardial effusion. A pleuritic fluid analysis showed specific gravity of 1.020, protein 4.6 gr/dL, glucose 98 mg/dL (within the range of normal values compared to serum glucose), and pH 7.5. Gram stain and stain for mycobacteria did not show the presence of microorganisms. Cultures of pleuritic fluid specimens for aerobic and anaerobic bacteria as well as mycobacteria were negative. An abdominal CT scan and a chest MRI did not show any lymph node enlargement. Erythrocyte sedimentation rate (ESR) was 56 mm/first hour. Hematocrit, white blood cell count, platelets, transaminases, alkaline phosphatase, ãGT, creatinine, blood urea, globulin, albumin, protein electrophoresis, electrolytes, urinalysis, â2-microglobulin and serological tests including hepatitis A, B, and C virus serology, VDRL, Widal and, Wright were normal. A tuberculin skin test was negative.

An extensive evaluation for an underlying collagen vascular or rheumatologic diseases that included tests for antinuclear antibodies, anti-DNA antibodies, lupus erythematosus cells, measurement of the third and fourth component of complement (C3 and C4), and a test for rheumatoid factor were normal.

The patient was given treatment with steroids for three weeks that did not lead to a considerable decrease of the amount of pericardial or pleural fluid. A trial with non-steroidal anti-inflammatory drugs was given for about one month (indomethacin 50 mg three times a day for 10 days and colchicine 1 mg twice a day for 20 days). No improvement was noted with this treatment either. She was transferred to another hospital were a biopsy of the pericardium was performed.

What is the most likely cause of the pericardial and pleural effusion? 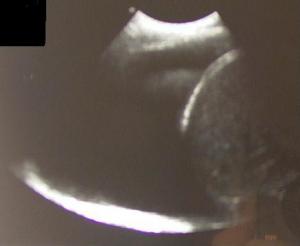